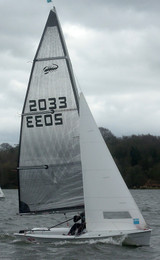 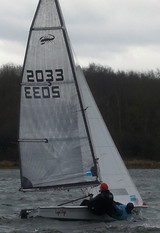 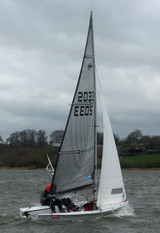 Lennon Sails is a new brand in the Scorpion but Mike Lennon is not, having won the Nationals 3 times in the late 80s and early 90s. Mike recalls his last sail in his beloved 1880 ShockWave was probably the 1990 or perhaps 91 Nationals.

“I learned to sail in a Mirror but learned my racecarft in the Scorpion, racing the likes of Jon Turner, Richard Parslow, “The Currans”, “The Haines”, John Mursell, Adam Bowers, Kieth Atkinson and many more…. I was in contact with one of my old adversaries and I suggested I would love to have the Lennon brand back in the class I still think of as being close to home. Steve Walker has accepted the challenge and we have now produced set MK1.”

The first challenge is to understand the class rules which is not always as straight forward as it might sound. Some classes choose to interpret rules differently than others might treat a very similar rule. The Jib rule is a good case and has been written to incorporate the drop clew foot round. Back in the day this was in effect a measurement point cheat. The tidying up however has left some room for meddling with the luff/leech length and foot drop at the tack. So we attacked this to see what the measurer would make of it. Strict WS definitions would stop this little work around. And so it was! However with a fairly small tweak to the outline shape we are confidant this will be ok going forward. This makes the effective plan form of the jib bigger.

For the main we chose Membrane - a technology Lennon Sails has exploited to win both the Moth and I14 National/European and World Championships. It is just easier to keep the exit straight and the sail smooth with this stuff. Technora black yarn and 35 micron PET film.

The spinnaker is in Dynakote 75 and the initial shape of all 3 sails is based on experience brought out of strong development programs in other classes.

Be the first to review this product.